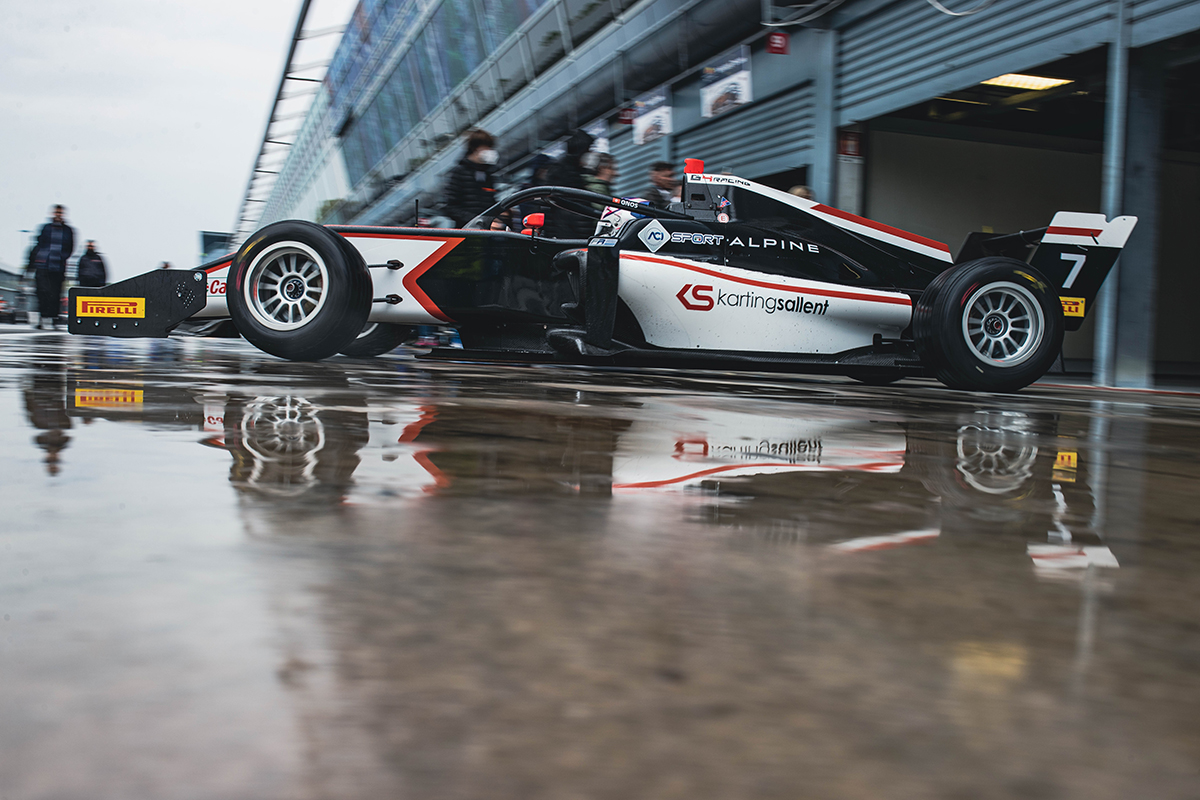 Autodromo di Monza welcomed the first round of the 2022 Formula Regional European Championship by Alpine. On the northern Italian circuit, G4 Racing had an unlucky weekend, showing promising pace at times but failing to capitalize on it.

Matias Zagazeta set an excellent P7 lap time in group B of the first qualifying session, which earned him 15th place on the grid and fifth place among rookies. An hour before the start of race 1, the rain started to fall at Monza, changing the variables. The drivers had to deal with precarious visibility conditions due to the water raised by the cars in front of them.

In these tough conditions, Gnos delivered a brilliant run, recovering from the back of the grid and gaining 12 positions in the first seven laps of the race. During the eighth lap though, he put his left rear wheel on the kerb, losing grip and spinning into the wall. Unfortunately, in the impact, Axel hit the chassis of the car with his right hand and that resulted in a strong bruise.

On Sunday morning, Gnos tried to take part in the second qualifying session, but the pain forced him to give up on race 2. Zagazeta and Tangavelou, on the other hand, did their best in a hard-fought elimination race. The Peruvian driver was fighting in the first half of the pack, when he was pushed off the track by a rival, slipping to the back of the field. Tangavelou, on the other hand, completed several overtakes, recovering some spots compared to his starting position.

G4 Racing will be back in action at Imola for the second round of the Formula Regional European Championship by Alpine season, scheduled for the May 8th weekend.

Axel Gnos (Driver #7): “Very hard weekend on track and mentally. I had difficult practices and a bad first Qualy, which put me in an incorrect position to start race 1. I had a nice start, went up 13 positions in the first seven laps, then I lost control of the car in T7 and crashed into the wall. My mistake. I tried to do the second Qualy on Sunday Morning, but my right hand, injured in race 1, was hurting too much, so I decided with the team to not take part in race 2 on Sunday afternoon. I am very frustrated and saddened, knowing that I never missed a race due to medical/physical problems. However, this was the correct choice that we took and I will come back healed and faster in Imola”.

Matías Zagazeta (Driver #8): “First race weekend is done, and it was a challenging one, we had a very good pace, but some mistakes from my part restricted us from getting better results. It was a very good learning experience, and I will have to look into everything to maximize our potential in round two. Massive thanks to G4 Racing for the hard work the whole weekend and the amazing car. We go again in Imola”.

Owen Tangavelou (Driver #92): “I have to work on the qualy, because the result was not there. Starting from the back of the grid was complicated, but the race pace was good. I was expecting higher positions this weekend. Fort the second qualy, the pace was there, but I had an issue with the strategy, and that complicated race two as well. I am really excited for Imola, and I hope that the qualy goes better”.

Adrián Muñoz (Sporting and Technical Manager): “Complicated start of the championship. The qualifying sessions didn’t go as expected as we didn’t get good results in both of them, making our drivers start in difficult conditions on the grid. Race 1 was disrupted by some incidents and in one of them Axel injured his hand. As a consequence, he was not fit to compete in race 2. Race 2 was difficult with some traffic and incidents as well. Owen tried to recover as much positions as he could, and Matias unfortunately was forced off the track by another competitor. Onto the next one, Imola”.